Brad Mehldau Trio: Live at the Village Vanguard Part I 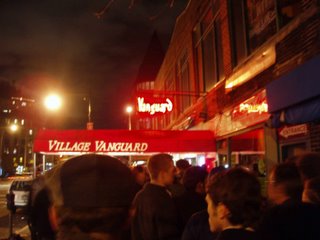 Amazing, creatively brilliant, just a few words that describe pianist Brad Mehldau's approach to music as a soloist or with his jazz trio. This approach was clearly evident tonight at the Village Vanguard, as Brad produced music of mystic qualities with his trio which consists of Jeff Ballard on drums and Larry Grenediar on upright bass.

Olympian status is definitely a goal of any musican(s), last night's performance proved that Brad and his trio are not only on a high Olympian level but that they deserve a gold medal. But who said that it is a contest? Well, let's talk directly about the show and not talk around it.

The acoustic trio started with a rendition of Paul Simon's "50 ways to Leave Your Lover," which the bassist Larry Grenediar played a solo mid-tempo intro. After Larry played solo for about a couple of minutes, Jeff Ballard, the drummer joined along with the groove. Thereafter Brad followed and joined in as well. The trio on this song displayed a light touch yet played at a fast tempo. Brad Mehldau's trademark mastery of the left hand was also evident but with a thematic purpose. Essentially, the unison and intrinsic flow that was displayed on this song was a gleam of what would happen on all of the songs the entire night. Every note had a purpose and every note was deeply meaningful. The entire set was approached symphonically with an emphasis on the whole development of the meaning of the particular song being played instead of having the emphasis on displaying individual virtuoso talents.

Sometimes at different jazz events you get the feeling that the songs played by the musicians are over worked or too estoric. But not with this trio, hearing them play you actually feel the music in a positive and genuine way, not too overwhelming like some other trios. Larry Grenediar not only started the song with his bass intro but ended this song with a bass solo as well. After the song, the positive energy that would permeate the whole night was evident by the energetic applause and loud shots of approval by everyone including my self.

Visit my other blog page for more information about this great set.

I have written out a list of recommended recordings and breif review of each recording. It is in no way a complete list considering Brad's prolific output. Though my list is a valuable resource if you are new to his music.

A visit to Brad Mehldau's website is essential. Brad happens to also be a poignant writer so visit the site and listen to some samples of his music, view some of his videos and read some of his liner notes as well.

Anonymous said…
Your last message was virtually incomprehensible. There is something to be said for simplicity and clarity of expression. Who is your audience here? I would have appreciated and enjoyed reading your blog so much more if your writing was crisp, clean and to the point.
2:07 PM

What exactly are you saying? Could you be more specific?
3:08 PM

Anonymous said…
Hey Pete, glad you got me this link, thanks. I liked what you wrote of the trio s performance. I agree that the overall perfromance was excellent and the audience was very responsive. Two observations: The trio seems more and more to be choosing tunes and arranging with a more 'group' emphasis rather than the head, solo, solo, solo, head which occurs more (but not as much as most groups still) in earlier recorded material. I have always appreciated this group for its ability to collectivley explore the tune and interact based on what the arrangement calls for. Also, Brad seems to me to be pushing his already phenomenal harmonic and rythmic concept further with his lines especially compared to "indroducing" and "Art of the trio 1." His vocabulary is daunting. It continues to grow and sound even more unique and inspired. Any who...keep the words coming about the set.
3:26 PM

Anonymous said…
Pete, I think your blog about the show is very interesting. I liked your presenation, it's clearly thought out and well organzied. I especially like this line, "Essentialy, the unison and intrinsic flow that was displayed on this song was a gleam of what would happen on all of the songs the entire night." Your detailed description of the show makes me feel like I was there myself and also kick myself for not seeing it myself :-) Overall, good review.
3:27 PM

Anonymous said…
Pete,
Anonymous has no idea of what a well written critique is or could be. Your comments were very well thought out, and presented in a highly intelligent and articulate manner. I enjoy the way you write and get your ideas across. It was truly a joy to read it, and made me sorry for missing the show. You are obviously talking over Anonymous' MTV infected brain. Keep 'em coming my friend!
How do you feel about music giants and huge jazz influences such as Sun Ra, Pharoah Sanders, and John Coltrane? I'd like to hear your comments.
6:51 PM

Thanks a million. I appreciate the support. Pharoah Sanders and John Coltrane are truly heavy hitters in the Jazz world. Genuine, sincere and talented beyond comphrension. Coltrane, though talented, had his struggles like all of us but he really fought his life, he was a fighter and warrior of the highest degree. Listening to his music, I always hear him taking a serious yet even keeled approach to making music. It is as if the notes he plays keeps him alive. I intend in the future to write a profile on him. The two albums of his that have had a deep affect on me are "A Love Supreme" and "Blue Train". They are actually on two opposite ends of the specturm but both are full of energy. "A Love Supreme" technically combines several international styles of music but more importantly, it has a spiritual aspect that I don't know how to describe in words.

Blue Train is an intense blues session that is very accessible to everyone, Coltrane really exploits the genre, combining it with Jazz and the result is a fun and energetic session that is a joy to hear. I smile when I hear those melodies. Kenny Drew on the piano, Lee Morgan on trumpet, Curtis Fuller on trombone. I can't remember the bassist on this project, but all in all a joy to listen to.