Theater Review: The Woman in White 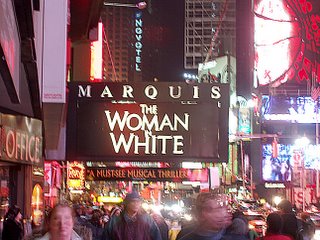 Modernity or Gimmick? The musical "Woman in White" employs some advanced technology for background stage props. Instead of the usual props assembled by stage workers, the props are projected onto several large screen-like canvas that rotate on the stage. Sounds interesting? It is. The technology works. The transition from scene to scene is smooth and there is a strong 3D effect. With this musical, the technology employed does not interfere with the story.

The story revolves around a secret, a secret that belongs to the woman in white. There's a love story, great singing, a live rat that plays a role, and an amazing cast overall. There is intrigue and constant twists and turns in this modern musical. A fabulous show.