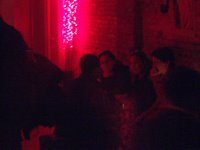 This past Friday I had an amazing time watching some friends of mine perform in their respective bands/quartet. Right after work I had a chance to see my boss stroke the ivories on the piano with his truly world-class eclectic group Luxo100. The band is made up of about 4 people. My boss performing dual duties playing the keys/electronic keyboard and utilizing some box where he was changing the music somehow, yes, I am not quite sure what that was! Standing next to him was their singer and all I have to say is I kept thinking I was in a night-time drinking lounge with a CD playing on speakers, her voice blended perfectly with the band, very succinct. I've been to sooooooo many spots and the singers tend to have a habit of letting you know that they can sing but not her. With her soprano like voice she supported the members just fine and at times she lead but it was never over the top. It was just right. The third member of the band was a guy named Blake. I think these guys all went to the same high school because the due to the groovy laid back, classy feel of their music and this guy clearly stood in unison with the group. The fourth member of the band played flute and saxophone(tenor sax). I must say, I enjoyed this guy's playing, he was great. I will have to get more info on the type of music these guys where playing, obviously it was a mix of several different types of music spawning several continents and several generations. Yes, impressive but more importantly enjoyable!

After the first set which took place in alphabet city in Manhattan, I jumped into a taxi to catch some jazz at the upstart jazz location - The Jazz Gallery, located in the west side of the village. Marcus Gilmore led his quartet which features him playing the drums, a pianist, harmonica player, bass player and a saxophonist. I enjoyed everyone as they took turns improvising on various melodies with an energy that was quite infecting to the crowd. Each member creatively offered great interpetations of various melodies. As the leader and as the drummer of the band, Marcus made his presence felt as a leader and not overtly as a drummer which is a good thing. The pianist kept all interested also as it seem that he was playing fresh and unpretentious music that was inspiring. I absolutely loved the showed and spoke with all the band members who I must mention were friendly, professional and courteous to myself and all who expressed gratitude toward them.

Anonymous said…
Thanks for keeping me up to date with whats going on in the city. It is veryyyy appreciated from here in Australia :-)
4:33 AM