A Work of Art: The Cube

Posted by Pete Duhon on May 21, 2006
Apple Computer just opened up their new store here in Manhattan, New York, precisely on the prestigious 5th Avenue, an avenue known as a shopping destination for the wealthy which also happens to it a destination for international tourists.

The new Apple store, which is underground, is enclosed in a glass Cube which was designed personally by the CEO of Apple computer, Steve Jobs - at least that's what someone told me as I was standing in line for 3 hours to gain entrance into the store - stands in front of the General Motors skyscraper and is across the street from the beautiful Central Park, Central Park being a destination for true New Yorkers and tourists alike.

The glass enclosure is simple in design yet profound in meaning, the enclosure contains an apple logo that appears to float within the enclosure. The only other piece of architectural design that is similar to the Apple store here in Manhattan that I've seen would be the Morgan library, which also to my eyes appears very similar to another piece of work designed by Apple, the Apple Cube. At any rate, the Cube shape design of the store is something that needs to be seen first hand, and of course, within the store, one can test all of the great products made by Apple Computer. Did I mention that you can also check your email there for free? Notice the pictures of the Apple Store, The Morgan Library and even the Apple's older model of the Cube computer which they no longer sell. 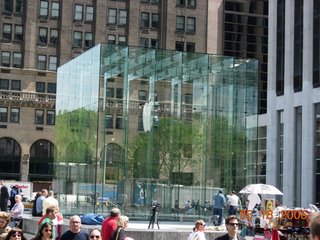 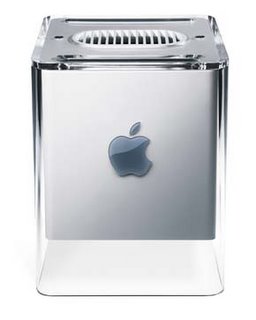 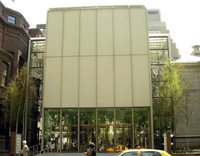