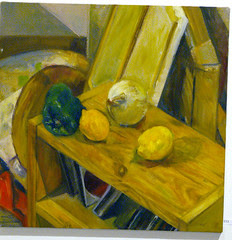 This past weekend I was invited by Don Porcella
to attend a reception hosted by the ISE. There was a mixture of artists from America and Japan who all currently reside in NYC.

If you click on the picture you will be directed to an area where more of the paintings from the show are posted. So go ahead and be daring! Click and travel to the unknown.

I like the painting here for its strong compositional aspects. Right above the fruit you have a couple of objects which subtlety direct your eye to the fruit. Ironically though, the bookshelf that the fruit is on actually is titled downward as if we are viewing the current scene the way a child would see the scene in real life if they were standing next to the fruit not from the view of a tall adult or athlete, for example, Lebron James, the 6 foot 8 inch tall basketball player. Despite the vertical axis which the painting sits, the viewer eye is held within the canvas due to the objects in the bookshelf which serve as an inverted pyramid right under the fruit. The fruit in the painting is not falling off the canvas but rather its stationery which is evident by the lemon right next to the green pear.

There's also a nice rhythm sustained in this painting, right above the green pear there is a circular object that anchors the pear and the table. This circular object is also echoed by the red circular engraving located on the inverted pyramid objects which I mentioned previously. There is a continuous echo with the red scarf on the floor. The rhythm of Veronese and the composition of Cezanne. A mature painting.