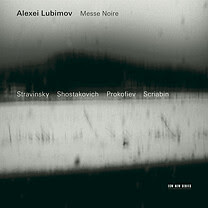 Perhaps your feeling nostalgic and you want to hear some great Russian classical music. Considering that today officially marks the 100th anniversary of the birth of the composer Dimitri Shostakovich, I recommend the album titled "Messe Noire." Performed by Alexei Lubimov, a solo piano recording, this recording features several works by Russian composers as varied as Igor Stravinsky, Dmitri Shostakovich, Sergey Prokofiev, and Alexander Scriabin.

The composition on the album titled Largo written by Shostakovich actually reminds me of the monumental Brad Mehldau tune "When it Rains" found on one of his albums titled Largo, a song I wrote about here on Art Comments. Overall the album has a strong contemplative feel. If you pick it up let me know your thoughts. Here's a direct link to order the album: ECM Messe Noire.