Francis Bacon at The Metropolitan Museum of Art

Posted by Pete Duhon on May 21, 2009
A Painter for Our Times, Francis Bacon Arrives at the Met

Most artists are deliberately abstruse when it comes to expressing their thoughts, filling the canvas with impenetrable abstractions or hidden symbolism. Not Francis Bacon. As an exiting observer remarked on her way out of this grimly exhilarating show now open at New York’s Metropolitan Museum of Art, “He has something to say, and he’s saying it!”

On display for the viewing public from now until August 16th, Francis Bacon: A Century Retrospective presents some 65 paintings of unapologetic intensity. Commemorating the centennial of the birth of Francis Bacon, who died in 1992, it is the first museum exhibition in New York dedicated to his work. And what a dramatic show it is.

Perhaps in more peaceful times, the impact of Bacon's blurred, pummeled faces and wide-mouth screams of man and beast could be received on a purely philosophical level, as acutely vivid allegories of existential angst. But in the context of today’s times, the juxtaposition of man and meat is all-too revolting, and the sight of nude biomorphic figures weirdly perched on pedestal or table all-too disturbing and real. It is art that speaks to, or more so howls at, the conditions of our own fear-ridden world, where violence and brutality have so savagely dehumanized the experience of life. 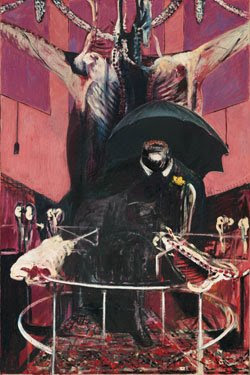 In one of a series of paintings called the Man in Blue, a businessman stares watchfully from the canvas--his face, a grotesque pallor of sickly phosphorescence, caged in vertical shadows and equipped with biting teeth. How easy it is to see in this sordid portrait study, and others like it, reflections of the unremorseful greed of bankers and CEOs, those for whom the heart is just another piece of meat.

In a previous room, Francis Bacon is quoted in a wall text as having once said, “I remember looking at dog shit on the pavement and I suddenly realized, there it is—this is what life is like.” Indeed the artist's work seethes with the anger of a damaged man, imprisoned within a world filled with physical pain and mental anguish. A world of shit, in other words. And remarkably like our own.

Maurizio Maranghi said…
I love Francis Bacon's art work. It's really thought provoking; it arouses the deviance I have in me, that I dare not act on. I wish I was fortunate enough to be there in person at the Met, to see it.