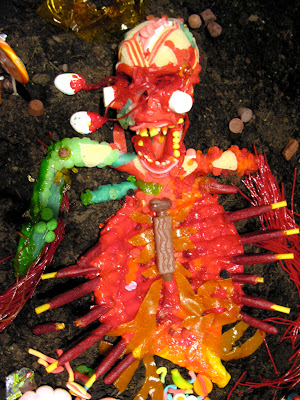 The 18th century view of language is largely based on the concept of “decadence and decay”, words which are synonymous in many languages, including German (verfall). This exhibition focuses on decadent yet banalized behaviors – smoking, excessive drinking, over-eating, sexual promiscuity – and examines whether these over-indulgences are just another part of living a contemporary existence. However, these decadent lifestyles can lead to physical and moral decay and ultimately, death. Installations by Brendan Coyle and Mikhael Antone deal with fatality itself, and question viewers’ responses to and fascination with the everyday occurrence of death. Coyle’s sculpture “Candy Corpse” will simultaneously address death and decay; this installation will be altered throughout the course of the show as the materials respond to temperature and climate changes, but will never fully decay. 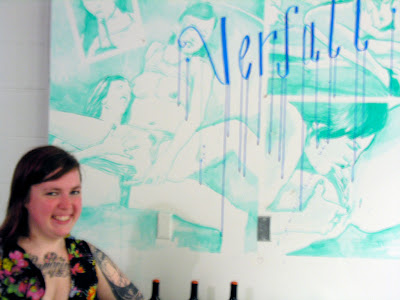 Curator Ginger Shulick in front of a wall painting by Reggie Manning an artist from Milwaukee, WI

This exhibition in Staten Island is very important because it is another significant moment in the continued evolution of the Staten Island Art Scene. Verfall: Decadence and Decay curated by Ginger Shulick, brings together artists from Staten Island and artists from other parts of the country. Given the importance of the show, I was very impressed with the variety and dedication each artist represented in their work. I thought all the art in the show was extremely provocative and alluring. 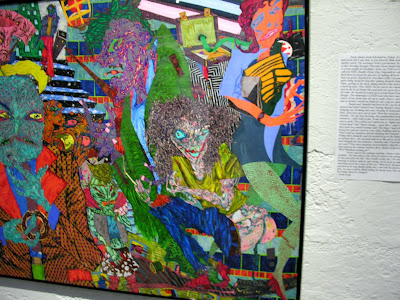 A fantastic piece of art by Scott Lewis, New Jersey. He is currently having a solo show at The Puck Building in NYC. 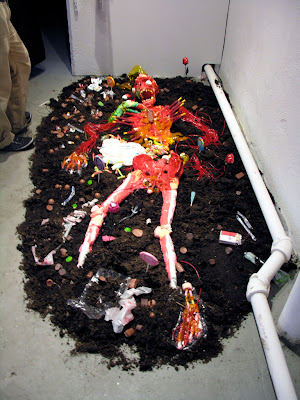 Brendan Coyle's magnificent "Candy Corpe" made out of candy lying in dirt. I was very impressed with Brendan's Candy Corpse (see www.candycorpse.com which allows people to participate in the ongoing project). Coyle put a lot of time and effort into handcrafting his corpse and integrated that into a decaying mound of dirt. During the opening, the corpse sinks ever so slowly into the ground. Go see it!!!


The Staten Island Art Scene has many interesting and talented artists living and working in the borough. Many of those artists came to the opening last night and I tried to take photos of as many of them as possible. There are many more artists who are doing interesting work here and it is worth coming to "the island" and meeting these exciting artists. 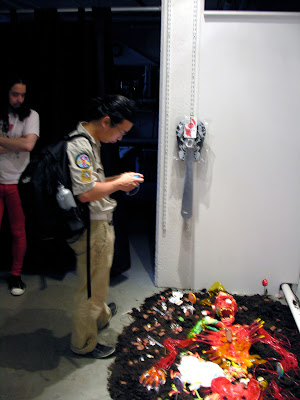 Tattfoo, an artist living in Staten Island was there taking photos of the Candy Corpse. Tattfoo is having an exhibition at The Bronx River Arts Center in the Bronx. see www.tattfoo.com/ 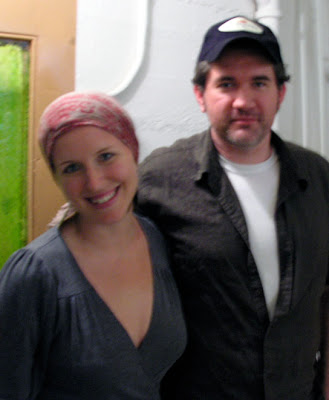 Stephen Lapcevic and his wife - Lapcevic is an animation artist living in Staten Island. see www.youtube.com/user/StevenLapcevic 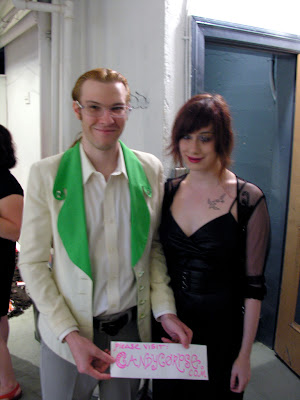 Brendan Coyle and Amanda Curtis are artists living in Staten Island and they also operate The Assembly Room, a gallery in Staten Island, NY. see www.myspace.com/assemblyroom