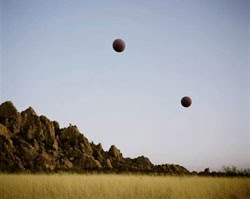 The School of Visual Arts (SVA), 209 East 23rd Street, NYC, in the Amphitheater

Since 1997, Janaina Tschäpe has employed the female body as her muse, creating universes of polymorphous landscapes, embryonic forms and ambiguous characters. Tschäpe’s drawings, photographs, films and installations seek to give form to the trance of art making, portraying not a dream world, but the sensation of being in one.

New York based Brazilian and German artist, "Janaina Tschäpe shares her forename with a Brazilian water goddess, and, not coincidentally, her photographs and performances-to-video feature sumptuously organic, watery, distorted female figures," writes Frieze. Janaina Tschäpe deftly exploits and subverts notions of identity and reality in her work. Janaina Tschäpe will give a presentation concerning her work, followed by a conversation with Peter Duhon (Director of Programming, ATOA, and Director of Art Comments), and Q&A with audience.

The School of Visual Arts (SVA), 209 East 23rd Street, NYC, in the Amphitheater

Discussion is organized by the New York based non-profit Artists Talk On Art.

retoque fotografico said…
Sounds like a great exhibition to attend. Great articles in your photo blog!
7:53 AM