Posted by Pete Duhon on March 28, 2011
Commissioned Artist for the Armory Show 2011,
Gabriel Kuri
By Dianne Bowen
Mexican-born, Belgium-based artist Gabriel Kuri, whose work has been widely shown in important international group shows, including the 5th Berlin Biennal (2008); Brave New Worlds at Walker Art Center, Minneapolis (2007) and at Colección Jumex, Ecatepec, Mexico (2008); and Unmonumental at New Museum, New York (2007) was selected to be the commissioned artist this year for The Armory Show. Recent and upcoming shows include Gabriel Kuri-Soft Information in Your Hard Facts at Museion, Bolzano; Join the Dots and Make a Point at Kunstverein Freiburg, Freiburg, traveling to Bielefelder Kunstverein, Bielefeld; and Gabriel Kuri: Nobody needs to know the price of your Saab at The Blaffer Art Museum at the University of Houston, traveling to the Institute of Contemporary Art, Boston. Kuri’s work was featured in all its printed matter including the official Jack Spade limited edition canvas bag with his image of a purchase receipt. His works were also on view in the booth shared by Franco Noero and Esther Schipper. 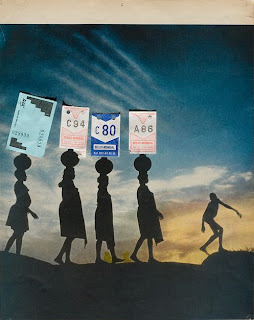 Gabriel Kuri
Untitled 2007
Gabriel Kuri’s consequential sculptures and collages are made from combining everyday found or purchased remains with marble, steel and other incongruous materials. These unexpected poetic combinations question the meanings of the materials and their possibilities for interpretation, addressing concepts such as hard and soft, assumption of fact, value and procession. In his piece, Untitled, 2007, several silhouettes of indigenous women carrying baskets or pots on their heads with ticket stubs collaged above the baskets, the silhouette of a man in the background ahead of them against a blue evening sky. The stubs appear as signifiers of value to both the contents and the people. Questioning our responsibility and participation both as a society and individually within these value systems. The man’s ambiguous intentions held in his gate, thin legs and somewhat distended belly. The images hold many interpretations layers of implications quietly unfold. 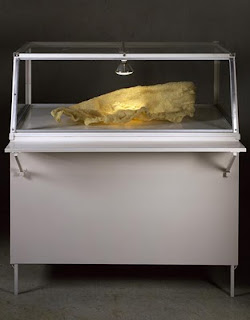 Directing their conversation with seasoned eloquence, he began with a brief introduction describing their long standing association and his admiration for  Gabriel Kuri’s work. Presenting a slide show of his work from various years, Kuri began with the image of a painting that would later result in the work, “Doy Fe, 1999”, a flood light pointed downward onto a large fiberglass pork rind. “The title when translated means by my will or I attest to notarize. It’s a phrase used by a certain hierarchy. A declaration of something is happening. Language, the titles are very important.”
Kuri also discussed his work at the 5th Berlin Biennale “Items in Care of Items, 2008”, painted metal sculpture (4 parts), magnetic numbering system. Kuri explained, “First I had to completely empty the space of everything all references and associations to start with a clean space. This was very important.” The metal works are placed in center of the museum space. The public was directed to use the numbered magnets to check their items on the work. The act itself addresses identity, possession and ownership. The public becomes an active collaborator forming the work through repetitive engagement with each encounter. 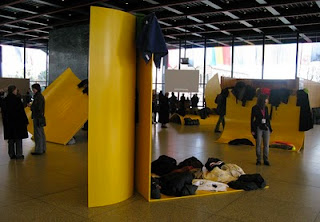 Gabriel Kuri,
Items in Care of Items (2008)
Painted metal sculpture (4 parts), magnetic numbering system.
Views at 5th Berlin Biennale for Contemporary Art
Richard Flood suggested and I would agree, that Gabriel Kuri’s art interacts with the public in the manner of congenial gesture, that of a handshake. This is quite a risky move by the artist with a fickle participant subject to change in a moments notice. Kuri stated during their conversation, “Sculpture is something that happens, it doesn’t simply rest there but is able to do something. Material is important but how meaning is constructed is most important. What does material mean? I’m looking at material, shape and the semantic implications.”
Richard Flood elicited a great response from Kuri when he stated, “your body of work overall seems related to an economy of melancholy, is that something you feel too?” Without hesitation, Kuri smiled and responded, “Well Richard, I am Mexican after all so I can see that.”
Gabriel Kuri’s work challenges us to look profoundly past our preconceptions of what we think we see or know. In the current global situation, nothing is what it appears, we must pay attention and question everything making his work significantly important now and as we look back examining history and discarded or forgotten stories.
Introducing myself at the end of the discussion his demeanor was similar to his work, serious with a hint of humor. Gabriel Kuri’s thoughtful observations provokes the viewer to open their eyes to the larger implications, meanings and interactions of everyday materials if we stop for a moment to notice.

kolkata flowers said…
Very nice painting,the color in this paintign is so cool.
7:01 AM