Skip to main content
Posted by Pete Duhon on August 20, 2012

“9. To recognize light as well as colour of metallic origin, and the discovery of beams as an equivalent of the economic development of the town.
“10. To relate the sun as a bonfire of illumination to the system of our flesh and bone.”
--Kazimir Malevich, “Resolution >>A<< in Art”

Rey Akdogan currently has her works on view at MoMA PS1 in one of their second floor project spaces entitled “off set”; she was also featured in Miguel Abreu Gallery’s “Surface Affect” show.  Both shows use lighting gels, light sources, metals and plastics as media; and she uses all of her media in their entirety—each is displayed as a whole—thus situating her work somewhere between ready-made/found object and sculpture. Using light as a solid medium, her show meticulously highlights the nebulae of the spaces, whether it is her solo show or a few works in a larger show.

As a staff member at MoMA PS1, I have spent over 20 hours in Rey Akdogan’s solo show.  Visitors, frequently rush through “off set” unprepared to face the barriers to her space.  At the entrance is a screen frame, folded to extend its triangularity and hinged into some sort of dwelling for the silver streamer looped to one of its poles.  She rarely uses adhesive, allowing her media to conjoin and intertwine through its natural properties.  Yet the piece has the corpses of unused electrical tape still tacked on.  The windows are blinded to eclipse the red filters, the most striking piece in the show.  Over the course of the sun’s movement, the red and white glow crystallizes into defined lines dawning in the corner of the room and moving down a roll of glittery Mylar like a timekeeper or the hands of a clock, metastable depending on the weather that day. Behind an electric blanket is Carousel #5, a slide projection that exhausts all of material such as a plastic bag or packing supplies into the light.

Similarly, at Miguel Abreu gallery, her piece with the carpet and lighting gel, strategically hung near the floor crunches the room into a pink line of light.  All of her works, though relatively small compared to the other pieces in the show by varying artists, have a massive effect on the space and the viewer’s access to it.

Her work addresses what is installation and modalities of minimalism.  It seems that Rey Akdogan’s installations are minimalistic, in that the media appear relatively un-tampered and un-tinkered.  This minimalism in geometry and reduction of form paradoxically maximizes the material, introducing a chaotic tension—which I would like to relate to Russian avant-garde and installation.  Ilya Kabakov, a prominent Russian installation artist, refers to minimalism as an “inner equilibrium and focused attention”, coercing the viewer to go “inside himself”[1].  In the maximization of her material, she invites the viewer to contemplate the material itself, as a whole, reduced to its original and pure form a la Malevich’s “Black Square”.  Yet her core medium, light, is inexhaustible. 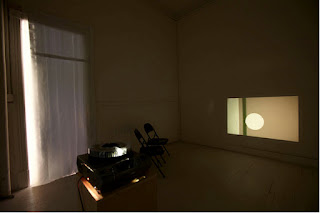 As “Black Square” claims to be the reduction of all form, in Carousel #5, this pairing of reduction and all, she diffracts and gathers her media as a high-powered microscope and as a telescopic whole: an image + light.   This projection motif is also the nucleus of the red filter on the window, where the viewer gains access to the projection and the projector itself, in which the projector bulb has harnessed the sun (and the post office outside PS1).  The media is distilled from the film set or theatre.  The privacy screen recalls the fabric architecture of the movie screen, extracted from the peripherals of a movie theatre, and replaced with what Roland Barthes refers to as “dancing cones of light”, the projections.  She wields light as solid beams, using the movement of space and time to animate them, recalling how Giuliana Bruno describes solid light films:

“Thus draped in the luminous space of the gallery installation, we are folded back into the animated surface of the film screening, woven into the very architecture of the spectatorial experience ‘suited’ to the electric psychic fabric of cinema.”[2]

Like the public movie theater, or recalling a Heideggerian clearing[3] (Lichtung), that tear in the world that the art-work creates, she has called us to her space to gather.  Her installation is both aggressive and serene, perhaps a bit like a temple.  Installation art is analogous to temples.  We are all gathered in the museum supposed to be looking at something, finding, feeling something, but we do not know what it is we are looking at or feeling (if we did, we would not need what I call the little white curatorial Viagra-texts, or reviews).  The pleasure, which we pay admission for and give our time, is the community of human and objects as sacred, and the contemplation of this.  James Turrell in his work “Meeting”, a floor above in MoMA PS1, accomplishes an intravenous architectural feat, providing benches for an audience, a congregation, to be worshippers of light and sky.

The frequent haste to dismiss Rey Akdogan’s work ignites the question of installation and interaction with installation art—how do we reach the unconscious of the installation work, which is relatively new, in the way we have been trained when we look at a painting? When entering Rey Akdogan’s space, some viewers refuse this focus of attention and reconciling with this minimalist and chaotic form.  They look to the wall text for permission to depart, with the supposed understanding of what it all “means”.

What is this review other than more wall text?—my viewing and re-viewing over the time I have given to her work.  I cannot make the critique of whether it is “good art” or “bad art”.  I evaluate my opinion based on the success of the realization of intention.  The intent for this installation is not articulated, nor does it need to be, but without it I cannot further express my “critique” past my experience.  It is an experiential installation—a heightened, plateau of experience in no need of this review I am writing, which is only an articulation of my gelling inside the image. I recommend staying with Rey Akdogan’s work, re-viewing and re-viewing.

Unknown said…
Lindsay Zackeroff's (New York) comprehensive artistic interpretation of both Miguel Abreu and Rey Akdogan's works of art was nothing less than "Brilliant". I read her article several times to enjoy the full meaning of their works of art. Brilliant, simply Brilliant!
Her prose reminds me of Ernest Hemingway with her total conviction and courage to describe the Artist's inner projection of their art. For me, the interpretation is an important element in understanding and identifying with the artist.
Lindsay, keep us in Love with Art!

Kevin Buck said…
I agree with Mr. DeLuca. Her writing style creates images of eloquent Faulkner-esque prose as well as it evokes wonderful conjurations of the images she seeks to explain.

Anonymous said…
Think you're a bit biased Mr. DeLuca, since you are the author's grandfather.
9:54 PM