The Turner Prize has often been criticized and various people and groups such as the Stuckists protest against Great Britain’s most famous art award every year. They are opposed to the Turner Prize’s focus on conceptual art since they would like it to concentrate on figurative painting. Turner Prize winning artists of the previous 10 years whose work are considered conceptual are Mark Leckey (2008), Mark Wallinger (2007), Tomma Abts (2006), Simon Starling (2005) and Jeremy Deller (2004).

Indeed calling the award after one of Great Britain’s most famous painters might not be a very suitable and fortunate choice of name, however, nominating artists that work with all different kinds of media and methods only references today’s diverse artist’s practice.

Penelope Curtis, director of Tate Britain and chair of the jury doesn’t even want to the award to be representative. She states: “The Turner Prize is neither a survey nor a barometer of what is happening in contemporary British art.” In contrast, the Stuckist’s approach is rather dogmatic. They claim: “Artists who don’t paint aren’t artist.” 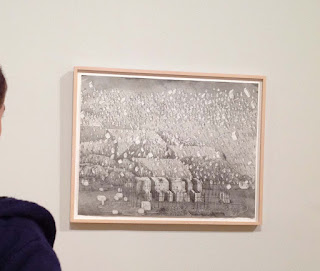 This year’s nominees are Spartacus Chetwynd, Luke Fowler, Elisabeth Price and Paul Noble. None of the four nominees is a painter, however, one of them, British artist Paul Noble, employs a rather traditional technique for his art production. His work consists of large-scaled drawings and numerous small-sized marble sculptures which are now exhibited at the Tate Britain in London. Paul Noble has been nominated for his solo-exhibition Welcome to Nobson at Gagosian Gallery in London in 2011.

Drawing remains the fastest way of accomplishing a visual expression and has always been an important part of visual arts. During the Renaissance drawing gained a special significance in the act of visual creation. Famous art historian Giorgio Vasari defined the term "disegno" - which is translated best by “drawing” - in his publication Lives of the Most Excellent Italian Painters, Sculptors, and Architects, from Cimabue to Our Times in 1550. However, “disegno” in Vasari’s sense is not only a "drawing“, but becomes an artistic inspiration and an intellectual concept, too. A divine means of creation and knowledge. 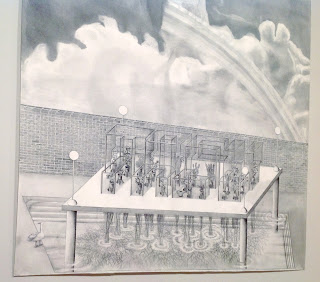 Although Vasari emphasizes the importance of drawing and sketching not only as an artistic method, but also as the essence of all artistic production, he doesn’t see them as autonomous pieces of art. In the course of art history drawings have hardly been valued as artworks themselves. They rather served as means to sketch a painting or sculpture. Only much later, in the 20th century, drawings became more appreciated and gained their autonomy as artworks.

It’s indisputable that Noble’s drawings are autonomous, self-consistent pieces of art. Not only their large-scaled size is impressive but also their density. Noble draws his fictional metropolis Nobson Newtown very precisely and the urban area is built up by hundreds of details. Even though Noble’s drawings follow rigorous constructional rules there’s this exceptional virtuosity in his use of ordinary, predominantly hard-mined pencils and all different shades. They especially reference Hieronymus Bosch’s perspective that makes space suddenly vanish. The drawing’s density reminds one of Pieter Bruegel the Elder’s paintings.

Vasari describes the “disegno” as the foundation of all paintings, sculptures and architecture. Noble eludes from this function of drawings. He states: “There is no story or time in Nobson Newtown. I consider it to be a play without acts or actors.” 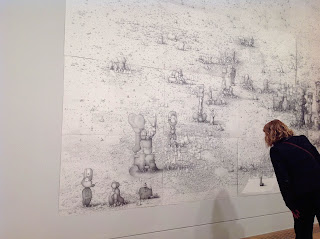 Therefore one can argue that Noble’s drawings are rather conceptual than narrative or aesthetic. This is where things become interesting. Artworks cannot be categorized so easily. There’s a lot of potential in showing artworks of different media next to each other. That allows the development of the interplay between artworks on a meta-level. Seeing Paul Noble’s work at Tate Britain helps evoking questions about how different material, techniques and methods serve different concepts, ideas and creativity in general.

Charles Thomson, Co-founder The Stuckists said…
"The Stuckist's approach is rather dogmatic" - surely you have missed (as most people do) the logical contradiction in the statement "Artists who don't paint aren't artists".
12:17 AM