Reto Pulfer at the Swiss Institute

Tonight the Swiss Institute opens a new exhibition showing Swiss Artist Reto Pulfer's Zustandseffekte. Pulfer's work is very elusive in many ways. It is difficult to categorize, however, it can be stated that there is an immersive architectural component to his work. Pulfer turns the 5000 square-foot gallery into a new setting, which suddenly leads to a surprising and unknown experience of space.

The gallery's white cube, sterile and clean by its definition becomes a giant but cozy tent. The tent feels welcoming and warm, in spite of its large scale. One could imagine being in a teepee, or a bedouine tent. Its walls are dynamic, drifting and moving. The space seems unlimited due to the fabric's transparency and the gallery's concrete walls are about to dissolve. A tangible space exists but also an imaginary unlimited one. 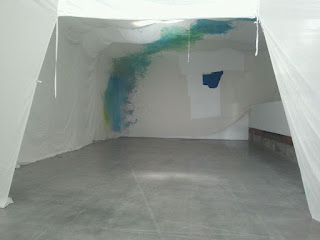 The exhibition’s title, Zustandseffekte can be interpreted or translated as effects of a given state. It seems like the room changes from solid to liquid until it almost vanishes.
The light falls through the skylight windows and becomes an important actor giving a site-specific component to the installation. It lightens up the tent from above and when it hits through the fabric it is softly distributed and floats through the room, creating a mysterious and sensual setting. The smell of incense sticks all over the exhibition space supports this ambience.
With large fabrics draping from the ceiling, hundreds of waves are formed on the sheets, evoking thoughts of floating water. One could assume being surrounded by water looking towards its wavy surface from far beyond. At the same time one could picture the sky up in the ceiling. On the egg shell-colored sheets there is a wide, diagonal stripe painted that leads from one corner to the other. It's in blue, green and yellow colors and spreads itself over the tent's ceiling like the Milky Way.

The sheets are rather subtle despite the installation's size yet they have the power to turn the space into a completely different environment. Pulfer's installation surprises with the ambivalence between its gigantic, impressive appearance and its creation of a reticent, calm and cautious ambiance that leaves the viewer in an almost meditative state.