This week is your last chance to see El Anatsui’s monumental solo exhibition Gravity and Grace at the Brooklyn Museum. The exhibition displays over 30 artworks, mostly in metal and wood. The work covers large parts of the museum’s floor, hang on the wall, stand in the room or act as a translucent fabric dividing the space by hanging from wires.

Early in his career his body of work - usually found objects - mostly consisted of wooden sculptures and wall pieces made out of used materials such as discarded mortars that he found in the streets of Nigeria where he lives. All of the object’s surfaces somehow reflect a history of use and human interaction.

One of his first works in metal is Peak Project (1999), an installation made out of hundreds of tin can lids that have been assembled. Anatsui uses the lids of imported condensed milk cans from the Dutch brand Peak. The work’s title not only references the manufacturer’s name but also the shape of the installation. It resembles the physical landmarks that trash generates and evokes questions about consumerism and globalism. 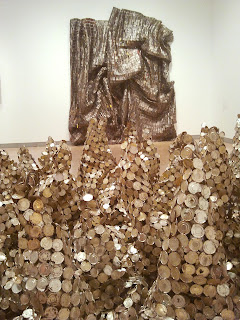 El Anatsui is renowned for his works that consist of thousands of little aluminium liquor bottle tops that are stitched together to form giant cloths with copper wire. These works are very complex not only because they are extremely detailed, but also because they combine different aspects of painting, sculpture, installation and even the ready-made.

The giant metal cloths become painterly compositions that however abandon paint and a flat surface developing into site-specific sculptures, while appearing and acting like a giant metal fabric. The liquor bottle top works also show references to Impressionism and Pointillism because each bottle top acts as a tiny paintbrush stroke.

Anatsui’s metal works are playful and there is a dreamy and poetic component due to the warm colors and the shiny, glittery material that also associates a certain opulence. The wall hangings and especially the translucent curtain-like piece GLI (2010) that spans across the museum’s 72-foot rotunda appears like a rain of gold. 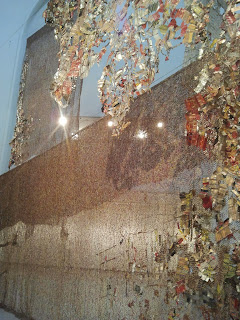 Several documentary videos accompany the exhibition. They give insight into the artist’s work process and document the finding and purchase of used materials as well as the assembly of the single components of a work. It is a collaborative, studio-based process where up to forty assistants produce segments that are later shifted around by the artist until one big fluid metal cloth evolves.

Anatsui even encourages curators and collectors to rearrange the metal wall hangings each time they are installed. Thus, every time an artwork is exhibited it changes its shape and folds and becomes a site-specific installation.

Anatsui is a master of the non-fixed form, his works allow movement and mutability. Not surprisingly, he once stated,“Art is a reflection on life. Life isn’t something we can cut and fix. It’s always in a state of flux.”