While at Art Basel Miami Beach, Art Comments interviewed artist Stefanos Tsivopoulos at the booth of Kalfayan Galleries. Born in Prague but based in Amsterdam and Athens, Stenfanos also represented Greece at this year's Venice Biennale with his solo exhibition 'History Zero'.

How does this exhibition here at Art Basel Positions relate or extend the work presented in the Greek pavilion at the Venice biennale this summer?

In a couple of ways, first, it’s the world premiere of the single channel version of the triptych History Zero that was shown in Venice. And the second way is I am taking a step further with the alternative currencies, which was in the central part of the pavilion in Venice by making my own proposal of an alternative currency which suggests an imaginary way of exchanging. This new currency is a handmade crocheted doily that bears the words “Fuck the  ” (it’s also the title of the work) and comes together with a series of three photographs that show different gestures and use of the doily. 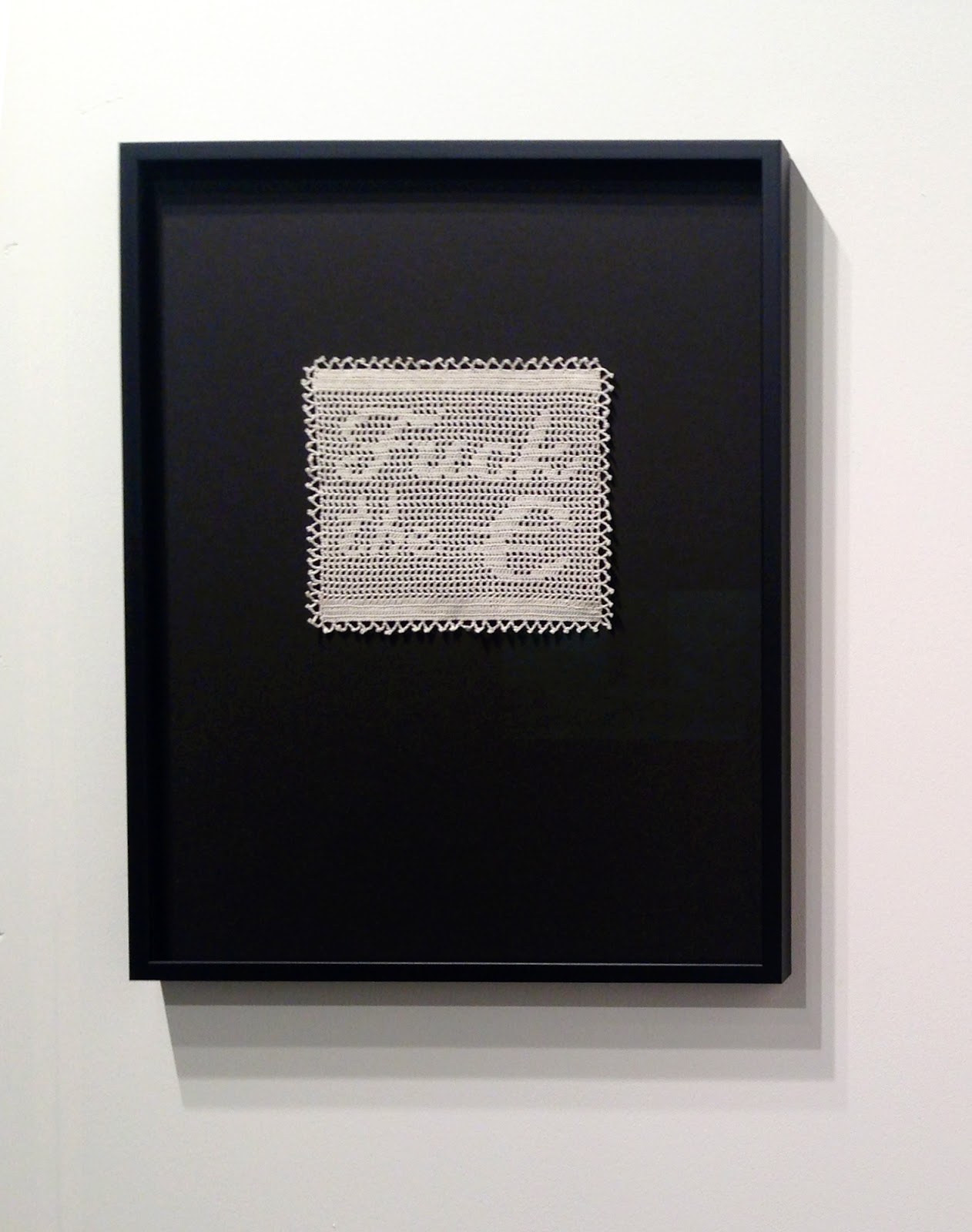 What's the risk of proposing a system as opposed to critiquing a system?

If you look a bit more carefully, the way my proposal is articulated is based on human exchange, on trust, mutual trust, and the idea of the gift. The idea of the gift as a concept and as a sacred economy was thoroughly developed by Charles Eisenstein. His concept is that we can propose a new way of exchange through different objects and different systems of communication. This is an imaginary, I would say, utopian way of human exchange. 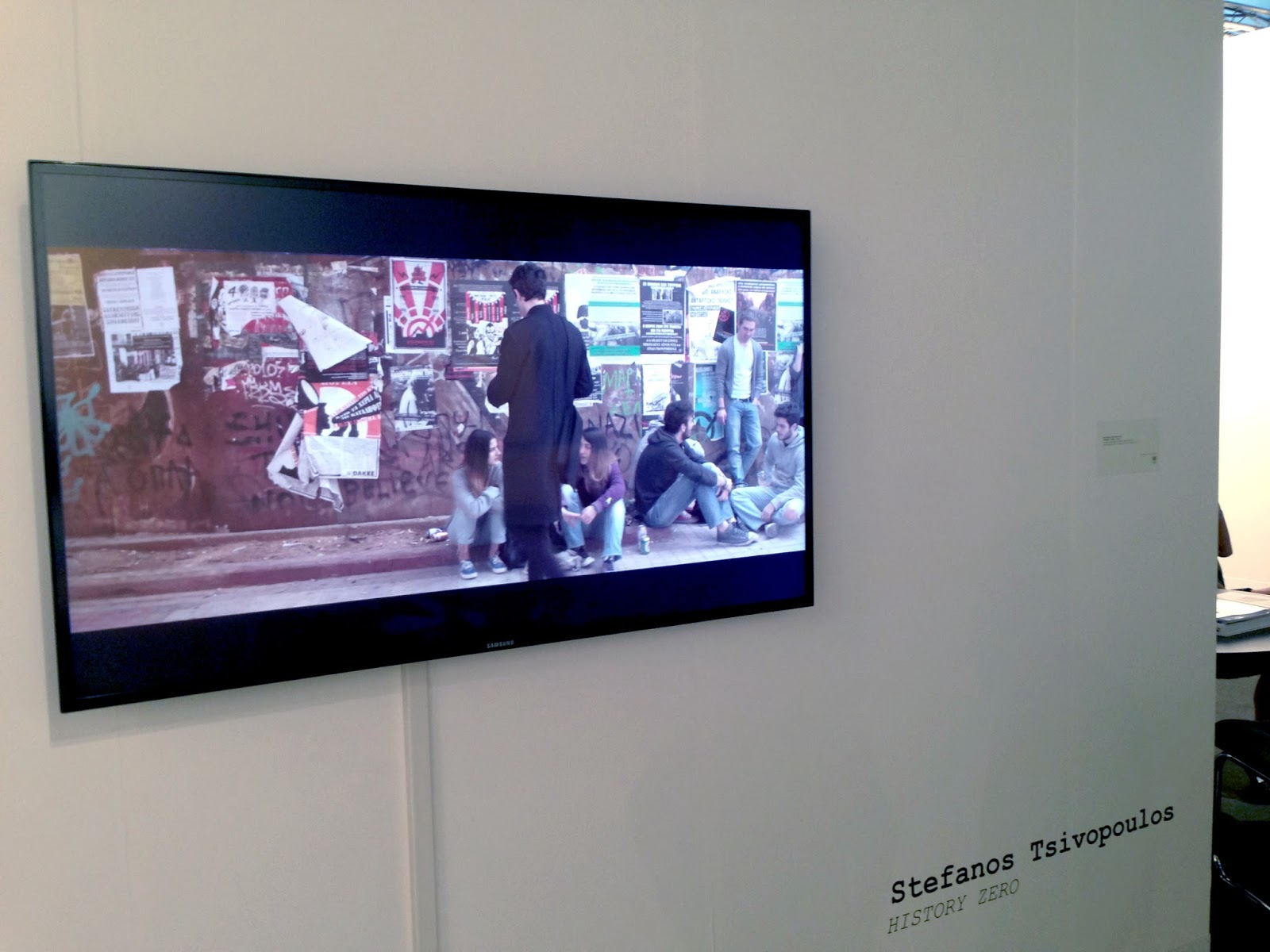 
This way of exchange relates to your posters here at the booth. Is this your gift?

Yes. The piece is called Residue, and it was inspired by my walks in Athens. I'm from Greece and over the years I've seen people displaying different commodities that look like luxury products such as Chanel wallets, bags, shoes, etc but they are actually cheap imitations made in China. This is part of the economic situation that reflects the current crisis in Greece. Most of these products are sold by immigrants living in Greece, and that’s their way of making ends meet.

And the second poster, again, is coming from the streets of Athens. Angela Merkel, the counselor of Germany who is highly related to the economic crisis in Greece visited Athens back in 2012 . There were a lot of demonstrations on the streets, so I tried to collect some of the stones and debris that were thrown during the protests. In the end I took a picture of the pile of stones. Two elements contradicting one another but at the same time both reflect the economic situation in Athens. 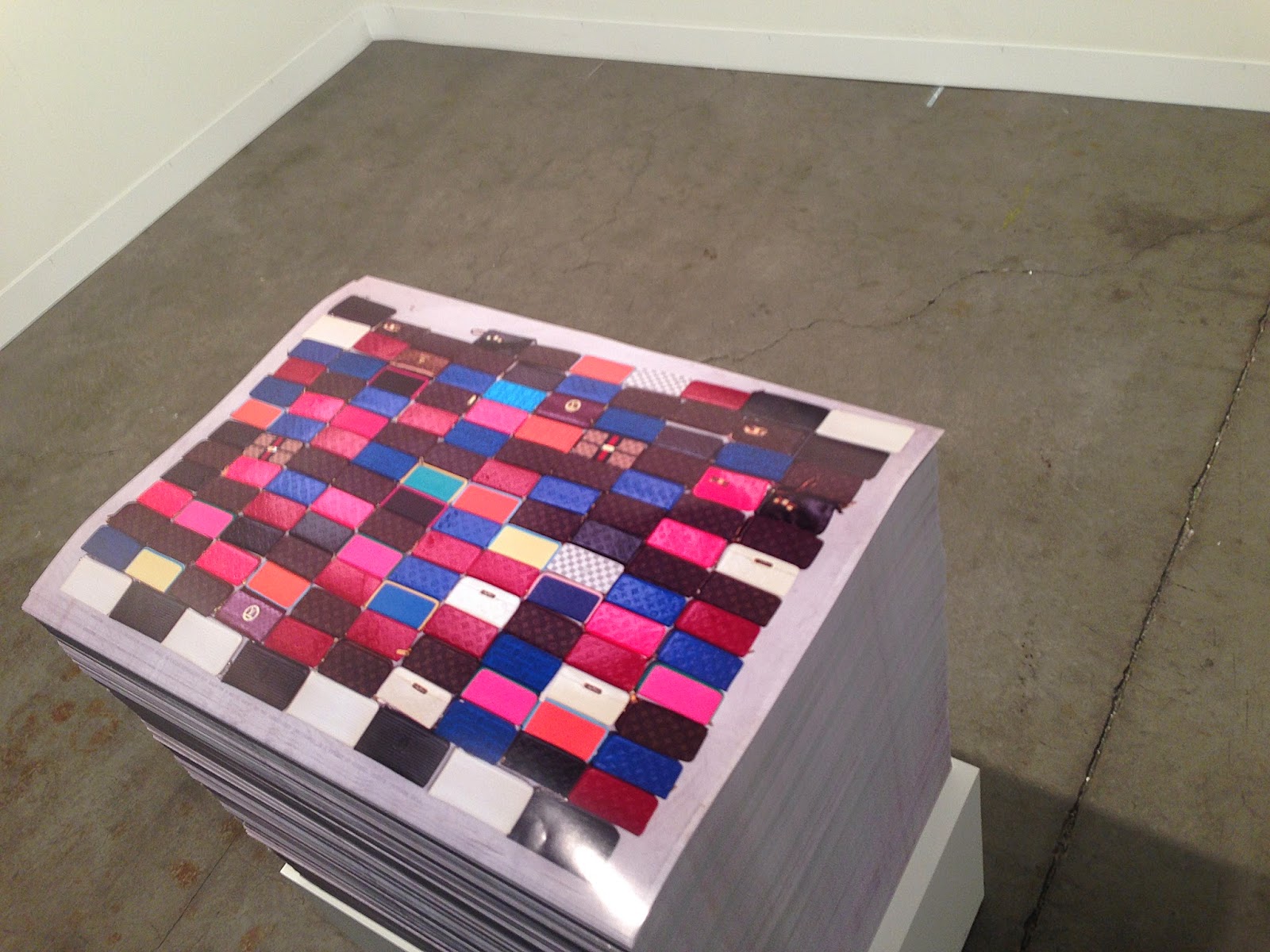 What’s the challenge or opportunity for art during moments of crisis?

I think art is affected by crisis but art has its own mechanisms to push back or find ways to present itself with new ideas. I think art can be much greater and much bigger than any kind of crisis because it takes it inside its own system and somehow makes new propositions and brings to the front new ideas.

For example, in my own country I see that people are coming closer now because of the crisis. The idea of art as a commodity or just as an art object changed a lot because there’s no such market anymore in Greece. People are away from the burden that they have to produce just a marketable object. They want much more than that. Art became more socially engaged and more critical towards society and that brings artists together by forming new initiatives and alliances, which is fantastic!

What disciplines or experiences inform your work? Obviously economic concerns, but what else informs your production?

I’m working a lot with history and archival material. One of my major projects was for Manifesta 8 back in 2010 where I did a lot of on location work and research and that’s where the film’s are based. This research involved a lot of search on archival photography and film as well as local history and myths, poetry, and other findings around the subject matter. It’s a bit like the work of a historian or an archaeologist who digs in the past and into the history of things. I’m tracing the roots of the tree, interested in the origin of things and for me this is a way of dealing with what’s happening nowadays. Even though I go back in history, it’s always in relation to the present and future. 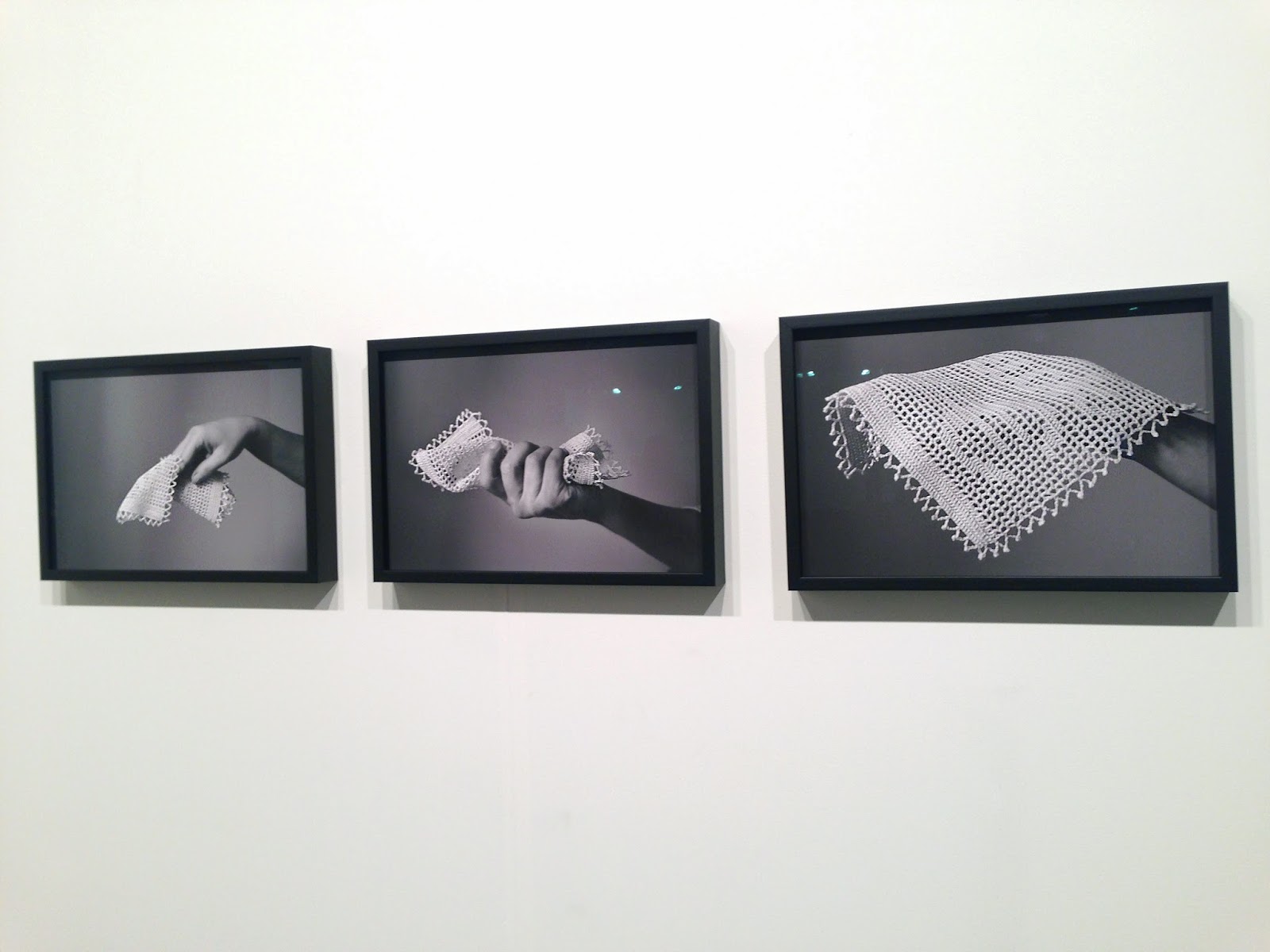 One of the things we like about your work is the way you approach history. At Art Comments we often discuss the notion of history as a medium and as something that is alive.

If I may, there's a very interesting recent example. For several years I’m collecting archival photographs and some of them are from the National Television of Greece. A few months ago the National Television was seized once and for all because the government austerity plans demanded the layoff of almost two and a half thousand people. The whole institution and 75 years of broadcasting collapsed overnight. Black screens appeared on TVs all over Greece and the Greek people were like, "oh, my god." That was terrible news not only because of the layoffs but also because it was a black day for democracy and for the freedom of speech.

I’m left with all this material in my hands and I wonder about its new meaning. I don't know how to approach it or how to deal with it anymore. I feel that these images have a completely new value now. So the idea of history is not something that is frozen in the past. Images and history are charging constantly and reactivated in different ways according to our lives now.