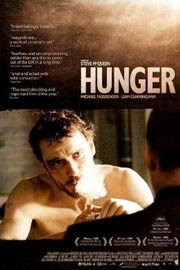 This Friday, April 17, Art Comments and the non-profit organization Artist Talk on Art are hosting a film and discussion event. The night will begin with a viewing of British Turner Prize winner Steve McQueen's recent award winning film 'Hunger' at the School of Visual Arts here in New York. Steve McQueen won the Caméra d'Or at Cannes last year for this film.
"Hunger follows life in the Maze Prison, Northern Ireland shortly before and during the infamous 1981 IRA hunger strike led by Bobby Sands. With an epic eye for detail, the film provides a timely exploration of the final act of desperation, when the human body is the last and ultimate resource for protest."
7:00pm: 'Hunger'
8:30pm: Remarks and Q&A session
This is the last event of the season at the School of Visual Arts for ATOA. RSVP and send any questions to info@artcomments.com.
When:
April 17, 2009 7pm - 9pm
Where:
The School of Visual Arts (SVA)
209 East 23rd Street, NYC
in the Amphitheater
Donation:
$7 General Public
$3 Artists and students
www.artcomments.com

Erin Franklyn said…
This comment has been removed by the author.
12:30 PM