Low Blow: And Other Species of Confusion 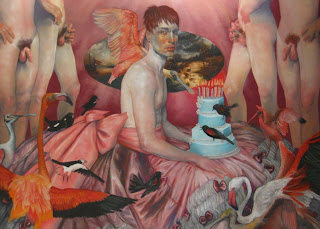 It begins with a room by Kristen Schiele featuring a dilapidated dollhouse turned French brothel—or wherever it is that B-movie vampire lesbians are normally housed. Schiele adeptly plays with texture, colors and patterns to create a tawdry atmosphere of faded beauty and morbid lust. That’s the first of many scenes of iniquity you will come across in Low Blow: And Other Species of Confusion.

A brash and witty exhibition, Low Blow features works by a group of 18 bold artists, many of whom seem to share in common a fetish for anodyne portrayals of lewd subject matter. Take for instance Ashley Hope whose impeccably girlish depictions of crime scenes bring to mind something along the lines of Mary Engelbreit meets Law & Order SVU. Then there’s Barnaby Whitfield, master pastel artist of the languorously maniacal. In his baroque world, golden bubbles of urine delicately float amidst pink flamingos and blue cake. Topping the list of contradictory forms of design and content are Benji Whalen’s stuffed-cotton arms with embroidered tattoos. In addition to the inherent irony of tattoo embroidery, there is the added dichotomy of themes. One arm bears a colorful rendering of a naked woman riding a tiger emerging from dense green jungle foliage and the other a black embroidery of the “Road to Calvary”. Equally audacious is Don Porcella’s weird encounter of the pipe-cleaner kind titled “Nature Boy: The Naked Beekeeper with Split Personality.”

Looking at Tracey Snelling’s miniaturized strip club, complete with lurid details—a desolate parking lot and glowing marquee promoting “World Class Topless Girls” on the outside and loud music, little red vinyl chairs, strip poles and video of dancers inside—is like looking through a rear view mirror at a cultural relic fading out of view. The tiny scale of Snelling’s work, like the dollhouse contained in Sheile’s, disarms the seedy setting of any potency so that it may be appreciated as a bygone aesthetic, pondered as an allegory or viewed simply as a cultural emblem. But perhaps the most attention-grabbing statement of this exhibition is Tom Sanford’s giant adult-movie poster of “Client 9” featuring Eliot Spitzer. A reminder that life often imitates art, even in its low forms.

Artful and daring, Low Blow is worth a peek.

LOW BLOW: And Other Species of Confusion