Size Doesn't Matter...If You Know How to Work It: The Return of the Dealer

I have always considered my relationship to the Armory show masochistically charged. And, like a beaten woman, I return every year, because I believe it is both my duty, and that it can change...

Let me start off by saying I did see a change in Armory 2012.

I have never written about the Armory before. I always found it disappointing a bit desperate, and ultimately as an artist, spectator, and human being, depressing. I resent(ed) the overall lack of consideration or appreciation for the spectators (thousands of young artists, curators, collectors, and non-affiliated viewers/supporters of Art)—the non VIPs, lined up in cold weather, then charged too much money to be herded around crowded tight quarters to see unjustifiably glorified artwork piled up in small booths with bored, anti-social gallery representatives.

This year is different. The whole vibe of the place was different. Was it a little extra space? Was it less exhibitors? Economy? Was the art better? After a few hours of evaluating the surroundings, it occurred to me that the reason could have something to do with Art dealers taking back control over the situation. Ride with me on this one for a minute…

I was introduced to Art Fairs (and the Art World) during the boom. The paradigm of selling art had already shifted to collectors calling shots; they had power and control. By the time I was in graduate school, (2003-2006), collectors came right to us (students) and bought out our studios. So, even artists catered to them. So, whatever gimmick or new trend collectors fancied, dealers and artists would produce, and that’s what the international art fairs were full of…full to the brim.

This year, to me at least, the dealers had a voice. The Armory seemed to be kissed by a “Volta” fairy (just a little kiss), I actually enjoyed myself. The Dealers worked it. Selection had integrity. Presentation consideration was apparent, and there were varying levels of curation-- from moderate to completely transforming the space. Ambach & Rice and Ronald Feldman both chose to exhibit only one artist, who transformed each space into a site-specific installation. Feldman’s entire space was overtaken, installation-style, by Leon Golub; who hung work at strategic points from the ceiling. 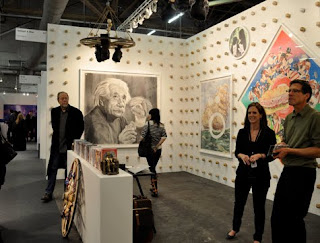 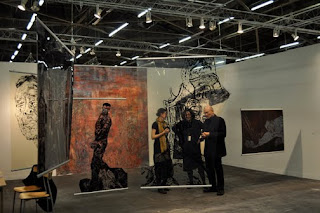 Mary Ryan Gallery had hung captivating red wall full of works by May Stevens (below), figurative works on paper I liked very much. 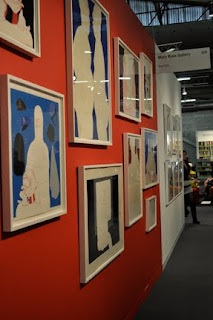 As I walked in and around, looking at art and space, I also couldn’t help but notice the dealers fluttering around, socializing/selling, and generating a huge amount of excitement.

And, Excitement is like laughter…it’s infectious. When I talked to Leo Koenig, who seemed higher than life, I remembered my grandfather’s story of the inexplicable, unforgettable “high” he’d get after a sale.“We’re selling, we’re selling…they’re all sold”, he told me, as he looked over my head, simultaneously greeting the next couple coming in to the booth and acknowledging the person to his right. Koenig had one of the edgier booths in the fair. It hung, for the most part as a two-person show. A subtle quasi-conventional exterior covered with framed drawings by Nicole Eisenman (currently in the Whitney Biennial) and a 3-d bronze dog by Matelli, leading to a racy interior, particularly Tony Matelli’s new (emulated) “dusty” mirror pieces, with finger smudges, playing off an Eisenman beer-case-3-d wall piece. 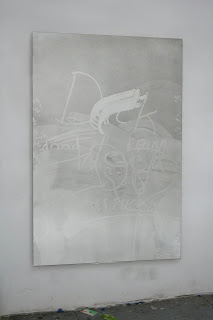 Apart from Matelli and Eisenman, one treasure corner, locked between two doorways held a couple of offbeat, unspectacularly modest black and white portrait photographs by one of the greatest painters alive, Gerhard Richter. Here edgy choices, reflective of the gallery, had heavy names to keep it safe.

Around another bend, each of the several times I passed by, Jack Shainman sparkled in the center of crowds, effortlessly and unsuspectingly educating the incessantly shifting entourage about the artwork; like butter. You just got to respect people who are good at what they do. An El Anatusi on the outer entrance, while in the booth he’d interlaced large works by a few of his artists. My favorite was Hank Willis Thomas’ “Cotton Bowl” which I thought was sensationally latent with content and beautifully done. 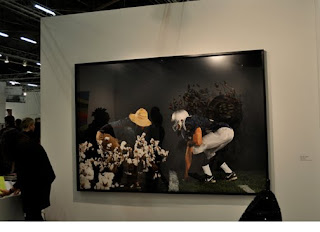 They weren’t the only guys working hard and working well, the whole fair was oscillating. Storage areas were continuously being opened to reveal more artwork, while artwork on walls would every so often change.

If I was rich, and could buy one piece of art from this show, it would be the startling, visceral dripping prosthetic vagina/blood sausage photo by Cindy Sherman (who currently has an exhibition up at MoMa). Filthy. I stood with it for a moment to take it in and fantasize owning it, I noticed every person that passed it have an overtly physical and or verbal reaction to it. It was so magical to me that I forgot to photograph it (painful upon realization).

Obsessive, Labor-intensive works, that flirted between 2-d and 3-d , were trends this year, in both the Armory and Scope. In the Armory, two that come to mind are from Istanbul. Several portrait-type paintings made of layered pieces of mesh stood out at Pi Artworks and Ramazan Bayrakoglu’s airplane on panel (Below, top image), at Dirimart. Bayrakoglu’s is a labor intensive process beginning with laser-cutting plexi, then hand painting each piece of plexi with serigraphy ink, then piecing the image back together on panel. 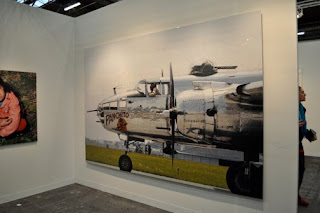 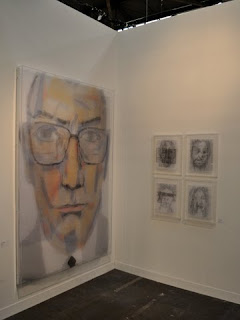 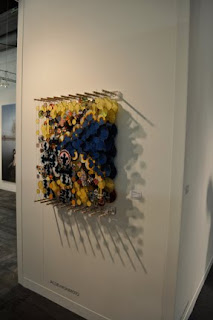 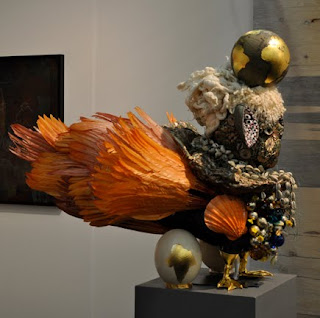 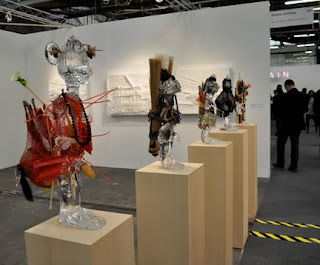 Other Artwork that Stood Out: 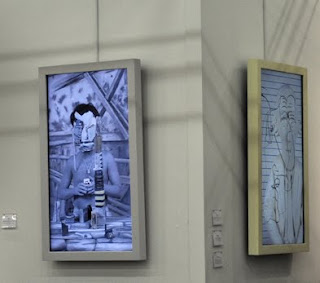 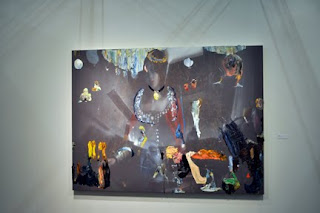 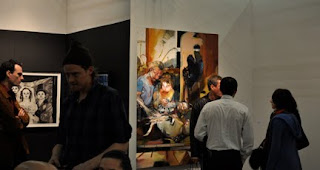 Artwork at Fredricks and Freiser 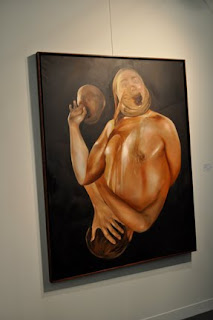 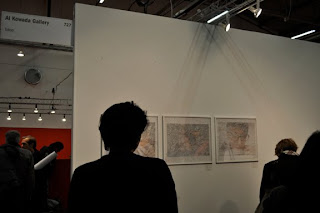 I realize that art fairs throughout history, and forevermore will have their share of borderline soft-core-porn-art. This year was the year of pre-pubescent crotch. Mahomi Kunikata’s sculpture, at Kaikai Kiki was just impeccably made, it was just beautiful…but what did it mean exactly? Was it a toy for men? And there was another booth that comes to mind for attempting to sensationalize a blue monochromatic anime-inspired figure projecting yet another hairless vulva, by slightly shifting the easel away from the entrance…why not just get the curtain, and make it at least comical? Maybe they are modern-day Courbet Origin's of the World, and I’m being too hard on them…for in Art, there is taste, and to each his own.

Not the best I’ve ever seen, but certainly always nice to see work by Lisa Yuskavage. Other woman-name-brands I noticed were Barbara Kruger, at Spruth Magers and Francesca Woodman, at Robert Klein.

While most of the Art didn’t particularly move me, and plenty of it I didn’t care for at all, I can’t remember being marked by anything offensively bad, as in previous years. At first I thought that meant the Art was “better”. A counter-thought suggested perhaps Complacent Art is more like elevator music, and at least “Bad Art” makes you feel something. Optimistically, I reminded myself that artists (even great ones) don’t always manage to get all the parts together to make the magic, but because of the obvious efforts (all of these laborious processes, skillful and or fine finishing), I can imagine they intended to, which is at least more respectable than a poorly-made-one-liner. I’d probably have to go back and see it again to come to a proper conclusion, which isn’t going to happen, so you’ll have to discern for yourself.

I love change. And, I love seeing other people live their dream, doing what they love and always working hard to try and do it even better. As speculated after the crisis, things are changing…no doubt. We are in the midst of a paradigm shift. I see it in Artist peers, who have been joining forces with one another to make different things happen; becoming more detached from the “Art World”, and more in tune to the actual world, each other and their work. I saw it at the NY Fairs, this year; dealers have gotten their mojo back. It’s in motion people, and it’s electrifying. As for the Collectors, at the Armory they seemed to be happy hunters, just the same, which is encouraging.

Have fun this week, and for sure, don’t forget the small Fairs!